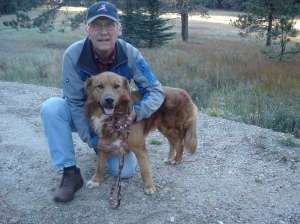 There’s a new Alpha dog in our house!

Desi is a five year old golden retriever/German shepherd mix, weighing in at just over 60 pounds. He joined our family as a “foster to adopt” project last Wednesday. We have to officially decide to adopt by Tuesday but it is a foregone conclusion.

Last week, I called Stray Hearts, the local animal shelter for guidance about possibly obtaining a new dog. They invited me over to walk through the facility and meet some of the animals.…if you haven’t been in an animal shelter recently, don’t go unless you are interested in adopting a pet…it breaks your heart seeing all those wonderful animals craving affection and love…on the other hand, it was great to see an organization full of staff and volunteers with kind hearts, so dedicated to animal welfare. We passed one volunteer out walking a dog, crouching down in front of her dog, nuzzling and loving the doggie, who was reciprocating…a poignant moment for both.

Desi doesn’t appear to be house broken but we are working on that. The process is complicated by the fact that he is not the least interested in the standard treats that the late, great Snickers loved– Begging Strips or chew bones. Finally we hit upon the ultimate reward treat– sliced hot dogs. Not just any old hot dogs but Ball Park franks…

Walking him is an adventure waiting to happen. He wants to smell everything and go everywhere. And right now. It’s like he’s thinking “gotta smell, gotta run all I can before they put me back into that @#$%! box!” Our runs leave me out of breath. Desi always seems to be running uphill (of course)–high altitude be damned, there are varmints to smell!

Suddenly, getting out of bed at 6:00 am is no longer a chore for me. Downstairs waits an increasingly impatient sentient being who wants nothing more than to jump for joy at my arrival (and the prospect of a walk)…

While Desi is a beautiful specimen, he is not perfect. He has a distinct limp at times that we didn’t pick up on the first day. I thought that he had stepped on a thorn or had a sticker in his pad. Then I noticed how he favored his right hind leg, not merely the foot. I did some research on hip dysplasia which was not at all encouraging. I took Desi to see Susan Gaffney, our local vet, dreading the outcome of the visit…Susan did her veterinarian thing, pulling and probing then announced that it was not hip dysplasia (whew). Apparently he had been injured, probably hit by a car and the injury healed incorrectly. She thinks that inactivity from being in the kennel may have accentuated the problem and a possible cure is more running/walking. That dovetails nicely into our housebreaking regimen which calls for more outside time.

Desi is pretty mellow—until he sees a varmint. Then all his primal wolf DNA instincts kick in at once and he instantaneously transforms into something that you would not like to have chasing you. The first time this happened, we were hiking in the national forest and he sniffed out some deer. Well, the deer took off and so did Desi. Unfortunately for my right rotator cuff, I was attached to the aforementioned newly transformed wolf-like creature. I was jerked nearly horizontal and was dragged flailing and shouting through the trees. Did I mention that Desi is quite strong? He could pull a Mississippi River barge. So, I did my best imitation of a sea anchor and managed to slow his assault and let the choke collar do its job. Eventually, he ran of oxygen. And this was on three good legs…! If this doesn’t re-build the muscles on his gimpy leg, nothing will. I am along to provide resistance training.

Thursday night, we came home late from Taos to find twenty plus elk in our yard and the greenbelt that flanks our house. They were so close that even I could smell them. Desi stood stock-still, taking in the aroma. Being a Taoseño dog, I doubt that he had ever smelled elk before. Now, elk in Angel Fire are accustomed to dogs. Often, they just look over their shoulders with a wary eye and stand still while assessing the threat. Not these guys. They immediately identified Desi as not some yapping house dog but a serious hunter, a predator not to be trifled with–even if he was being hampered by having to drag a noisy human appendage. They just vanished up the mountain.

Today, we were enjoying our (very) early morning jaunt when Desi alerted on something. Nose to the ground, he pulled me (uphill) through our local boulder field, through the woods, flashing by several neighbors’ houses, and down a street. I was certain he was tracking a bear—Snickers used to react the same way, though he was built so low to the ground that he didn’t have to sniff along the surface. Eventually, Desi scared up some deer. This time I was prepared, as well as armed with hot dog bits to reward him for not pulling me off my feet. We have an appointment with the local dog whisperer next week for some private obedience training! In the meantime, my aerobic fitness is improving! 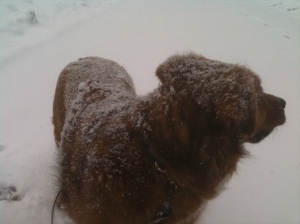 Don’t know how this is going to play out when the snow starts falling…I don’t think snow will actually slow him down much, in fact he may not even notice given his thick fur. It will, however, affect my traction. How will I ever be able to hold him back? Maybe this calls for mountain climbing boots and crampons (REI is having an on-line sale…I checked)…with his strength he will plow through chest high snow like an icebreaker on the St. Lawrence Seaway…I hope my shoulder ligaments make it through the season…

In the meantime, Desi has a pretty good gig going. Instead of being confined in a 4×10 kennel at Stray Hearts, he has the run of a pretty good sized house, plus the massive greenbelt next to our house, and even the nearby national forest…not to mention all the hot dogs he can earn. I’ve been giving him a treat every time he pees outside. He quickly discovered that if he just raised his leg he would get a treat. After being faked out a couple of times, I caught on and stopped with the food until I saw some actual water. See, you can teach an old human new things…I have yet to hear him bark. He whines when I hold him back from chasing things but no barking…right now, he is useless as a guard dog since he would probably welcome anybody into our house who would scratch his ears…

Those of you lucky enough to have some discretionary funds available, consider buying Ball Park franks stock as the sales are set to rocket up

As Linda has pointed out (several times), while Desi may see me as The Master, the reality is that Desi is the new Alpha dog in the house which, for now at least, revolves around him.