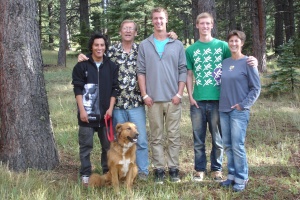 The Whole Gang, including Desi– The Wonder Dog.

People have asked me about my background. Here is a brief summary.

US Air Force Academy, B.S. Political Science. All Academy grads receive a bachelor of science degree because the core curriculum is science based; majors are extra. So, like everyone else, I took physics, chemistry, electrical engineering, aeronautical engineering, mechanical engineering, astro, and way too much math. 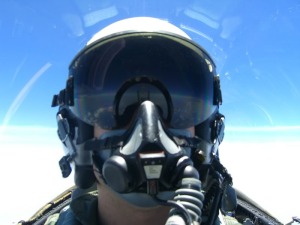 -Met and married Linda, who was assigned to the U.K. as a Russian linguist/analyst with the US Government.

-Graduate School of Business, University of Oklahoma, Norman. I squeezed a master’s in economics and a MBA into two years while Linda completed her MA in Soviet Studies in three semesters… loved it there…ran in a lot of races, including my one and only marathon.

Office of Plans, USAF Space Division, El Segundo, Los Angeles. I was officially a cost analyst officer and a deputy director in the Office of Plans, working on strategic planning for space projects. Some of the classified programs I worked on are only now showing up—the still-secret X-37B currently orbiting the earth is similar to one of them.

Base Commander, Antigua Air Station, Antigua, West Indies. Antigua Air Station is a USAF space-tracking and communications facility with 160 civilian employees, both American and Antiguan. The base was effectively a semi-self contained American island within the island nation of Antigua. We generated our own electricity and processed our own water.  We operated and maintained our own dining facility, two separate sewer systems (one fresh water, one salt water); communications systems (including an underwater cable back to the US in those emerging-satellite days), our own airline transit facility, ship off-loading dock, tracking systems and computers, and enormous fields of HF radio towers. I featured the air station in my first novel.

As the ranking (and only) Air Force officer in the Caribbean south of Puerto Rico, I was called upon to do things not normally assigned to majors. I met the Prime Ministers of three different countries, routinely worked and socialized with ministerial level officials, was a member of the Country Team of the US Embassy, and was occasionally given jobs by the USAF that were out of the ordinary. I was introduced to working with special operations people (SEALs, Special Forces). Did a lot of windsurfing and traveled the Caribbean and South America.

-Air Force Section Chief, US Military Group-Bolivia within the US Embassy-La Paz. Our budget ballooned from essentially zero to $50 million overnight. I wrote a strategic plan and spend/implementation plan of about $34/35 million for Bolivian Air Force programs (because airplanes and parts are more expensive than rifles or motor boats). I had to work this through the competing interests within the Embassy (e.g. State/USAID) and then with the Bolivian military (and in Spanish—now that was hard). I spent some time working with special ops people, as well as flying the Embassy Beechcraft C-12 Super King aircraft. I flew into places Bolivians didn’t even go—Linda flew along with me on many trips. Lots of operational stuff, more than your normal staff job.

I routinely worked with the US Ambassador and high ranking members of the US and Bolivian governments (the Bolivian Minister of Defense had a PhD from the University of Maryland. He and the Bolivian Air Force commanding general would sometimes give me Spanish lessons)…

After adopting Jake and leaving Bolivia, I was selected as one of 14 officers to attend a post-graduate fellowship program at prestigious universities around the country. My program was an academic year as a Fellow at the Hoover Institution think-tank at Stanford University. A Fellow is granted faculty status. I had a couple articles published in professional journals and got to hang out with some really smart people.  While I was there, Hoover was designated the Best Think Tank in the World by The Economist magazine (obviously I missed the day when they were reviewing staff).

Thence to Washington DC to be Deputy, Congressional Affairs division of the On-Site Inspection Agency (OSIA). I moved up to Acting Director after one year. As such, I routinely interacted with Congressional staffers and wrote testimony for the OSIA commander to give to DoD and even Congress. I spent my last year as a treaty implementation officer for the Conventional Forces in Europe (CFE) treaty. I flew to NATO headquarters in Brussels many times (for a while, every three weeks) to help hammer out a NATO position on various aspects of CFE treaty implementations. I also went to Vienna to work for a month at the headquarters of the 56 nation Organization for Security and Cooperation in Europe (OSCE) where NATO would negotiate with the former Warsaw Pact countries. I participated in lots of behind the scenes negotiating with officials of foreign governments

We moved to Angel Fire in 1995, sold the land we owned on the Back Basin Road and bought a house near Monte Verde Lake and the golf course. I took a job as a real estate puke. I am now a broker so I am a real estate super-puke.  This enables me to make a living and still have a flexible schedule in order to maximize my time living the role I most cherished: Mr. Mom to Jake, Josh, and Cameron.

I am an aspiring writer with one published novel to my name; number two is off to the publisher this month with numbers three and four in the works. Linda tried her hand at real estate then turned to starting a private school here in Angel Fire. She ended up as part of the staff at the Moreno Valley High School (MVHS) as a Spanish teacher. Now she teaches Spanish, Latin, English, and supervises students doing independent study in several other languages. Our three boys had their schooling in the Moreno Valley from kindergarten through graduating from MVHS. Jake spent three of his high school summers snowboarding in Chile. Josh spent a semester in Chile and a year in Germany. Cameron had a high school semester studying and competing in Italy and another semester at the University of Torino. Jake is now a certified snowboard coach/instructor for Team Angel Fire; Josh is a junior at Appalachian State University in North Carolina; and Cameron is a senior at Sierra Nevada College in Lake Tahoe.

This entry was posted in Family. Bookmark the permalink.