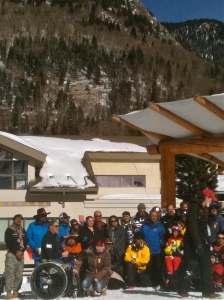 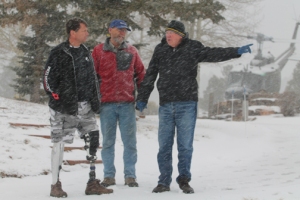 During the weekend of 24-25 January 2015, some 750 veterans, active duty and retired military, families and friends gathered at the Taos Ski Valley to feast, celebrate and recreate. Organized by disabled veteran Don Peters, founder of Not Forgotten, an organization dedicated motivate injured vets to participate in recreational activities to promote healing, and aided by the Taos Ski Valley (TSV), the Town of Taos, local VFW Post 3259, the Taos Milagro Rotary and others, the weekend was a smashing success. Here’s the full article and photos:

Don Peters, seated, in the foreground

The success of the Not Forgotten/TSV Veterans Appreciation Weekend program is spawning other similar initiatives. Neighboring Village of Angel Fire is hosting its own version of the Appreciation Weekend on February 20-21-22 in Angel Fire, partnering with the Angel Fire Resort and local businesses and organizations. All veterans, families, and friends will be welcomed. Here is the info for that weekend. Come on up/down/or over from wherever you are now and meet and play with fellow vets:

Sergeant First Class Dana Bowman, U.S. Army (ret) stopped into Angel Fire this past week to ski with his family. While there’s nothing particularly unusual about a man taking his kids skiing during the holidays, Sgt Bowman has another story to tell. He is a double amputee. A former Special Forces soldier and member of the Golden Knights, the fabled Army parachute demonstration team, Sgt Bowman lost both his legs in a parachuting accident in 1994.

Here is a photo of LTC Chuck Howe and me showing Dana around the New Mexico Vietnam Veterans Memorial State Park, courtesy of the Sangre de Cristo Chronicle. Please note the UH-1 Huey lurking in the background!

Dana does not believe the simple loss of his legs should stop him from living his life. After his accident, he fought his way back into the Army, becoming the first double amputee able to re-enlist. After he retired, he attended college where he earned his bachelor’s degree and pilot’s license in fixed and rotary wing aircraft. Now he travels the country as a motivational speaker to spread his “incredible story of spirit and determination,” often parachuting into an event. He is quite a guy!

Enough from me, here’s Dana’s story and website. See for yourself: http://www.danabowman.com/

Dana believes, as I do, that we must band together to aid our wounded comrades. He was not in Angel Fire by accident. He was here to learn about the National Wellness and Healing Center and to visit the New Mexico Vietnam Veterans Memorial State Park (both of which I have written about on this blog site). He held discussions with LTC Chuck Howe, U.S. Army (ret), president of both the Wellness Center and the David Westphall Foundation which helps run the Vietnam Memorial about a possible parachute jump into Angel Fire to kick off a veteran’s PTS retreat or a Memorial Day ceremony at the Memorial. Stay tuned for more updates on this!

Here is the link to the National Veterans Wellness and Healing Center:

Why should you care? The National Veterans Wellness and Healing Center (NVW&HC) is a 501(c)3 non-profit is located in Angel Fire, New Mexico. The mission of the NVW&HC is to establish an environment that is responsive to the needs of veterans and military families using creative therapies and processes that focus on emotional and physical healing.

What this means in practice is that veterans who have been diagnosed with PTS (Post Traumatic Stress) and spouses can attend retreats in Angel Fire, using the facilities of Angel Fire Resort and drawing on traditional and untraditional therapy methods. The couples are housed in the Resort hotel and all expenses of the retreats are covered by this funding, except for transportation to and from Angel Fire. Lisa Ling, a television journalist, did a documentary on one of the first retreats which was broadcast on the Oprah Channel. Here is a link for a five minute segment: http://www.oprah.com/own-our-america-lisa-ling/Invisible-Wounds-of-War-Breaking-Their-Silence In 2009, NVW&HC began retreats for veteran families who had been diagnosed with PTS (Post Traumatic Stress). Eleven veterans and spouses successfully completed the week-long retreat and have been celebrating their success since. We have continued to hold retreats every year since our inception and have a long list of satisfied couples.

Governor Susana Martinez put $350,000/year for four years for PTS counseling in her FY2015 budget, which was approved by the legislature. The program was competed and the MVW&HC was awarded the contract. This multi-year funding from the State of New Mexico will enhance our ability to continue these retreats. The plan now is to have a retreat in November 2014 and five more in the Spring 2015 ending before the end of the fiscal year on 30 June. We will then have three each half of the following fiscal years, covering approximately 350 couples over the next four years. This is New Mexico money for New Mexico veterans, but the NMW&HC will continue to raise money nationwide in order to include vets from other states. There is a waiting list for couples. Anyone interested in attending a retreat should contact LTC Chuck Howe, USA (ret), president of the NVW&HC, through its website at www.veteranswellnessandhealing.org

More information about Angel Fire and the surrounding area can be accessed through the AF Village Visitor Center website at: http://www.angelfirefun.com/

Here is a link to the nearby NM Vietnam Veterans Memorial State Park: https://www.vietnamveteransmemorial.org/special-features/14/RecommendedLinks/

For ceremonies on Memorial Day Weekend 2014, the New Mexico Vietnam Veterans Memorial State Park’s guest speaker was Joe Galloway. Joe was a war correspondent in Vietnam who accompanied the 1st Battalion 7th Cavalry Regiment into Ia Drang for what became one of the most savage battles of the Vietnam War. He co-authored the best-selling books We Were Soldiers Once…And Young and We Are Soldiers Still with the commander of the 1st Battalion, LGEN Harold Moore. 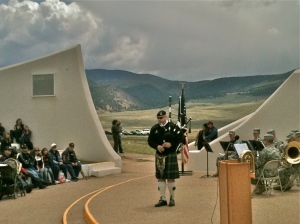 Joe is a dynamic personality, completely at ease speaking his mind on Vietnam, foreign policy, the VA, and just about any other subject that might come up. His speech was unscripted and came from the heart. His words resonated with the audience, made up mostly of vets and their families, who interrupted him many times with applause, laughter and even several standing ovations. The line was long for veterans wanting a handshake and book signed by Joe Galloway.

Last year, we hosted Jack McLean, a former Marine rifleman and author of Loon, A Marine Story. He had the same kind of connection and reception from an appreciative audience. Jack and Joe have set the bar pretty high for speakers at this particular Memorial!

Joe is kept busy with speaking engagements. He is also one of the driving forces behind the national commemoration 50th Anniversary of the Vietnam War which will take place in small towns and villages across the nation next year. The Vietnam vets will, at long last, be getting the parades they deserved years ago. http://www.vietnamwar50th.com/

A couple things that I picked up from Joe. He is proud of his association with the military of the United States. He loves service members. He wears his cavalry hat and Bronze Star with  a V device (the only civilian so honored by the Army) with pride. At the same time, I don’t think I’ve ever met someone more vociferously anti-war than Joe Galloway. And I think that those two positions are linked.

I do not presume to put words in his mouth so read his books for yourself. His website is http://www.lzxray.com

As an aside, there is a great article in the Vietnam Veterans of America Magazine at http://vvaveteran.org/34-3/34-3_angelfire.html about this Memorial, the first Vietnam Memorial in the United States.