An End of the Year Overview of Latin America

Latin America continues to be in the news– from the upcoming FIFA World Cup in Brazil to the train-wreck that is Venezuela’s economy. I have a strong interest in Latin America, having lived there and through multiple visits around the region. I will write a post for each of the more interesting countries over the next two weeks.

Then I will shift my gaze to the west and start writing about Asia. My second novel, Chita Quest, which should be available in late February, takes place mostly in Asia. Doing the research for the book gave me a new appreciation for Asia and highlighted how little I knew/know about the region.

Colombia. Things are improving rapidly in Colombia. When I was working in Bolivia in the early 1990s, Colombia was a mess. Once, my flight to Panama was cancelled– the airline offered me an alternative fight that meant changing planes in Medellin. I said “no thanks, I’ll fly tomorrow.” No way was I  going to transit the dangerous Medellin alone. Now, Medellin is featured in magazines like International Living and shows like House Hunters International as a wonderful, inexpensive and peaceful place with much to offer as a retirement destination for Americans.

Progress against the FARC– the Revolutionary Armed Forces of Colombia– continues. It looks as if the FARC will be brought into the political process. According to this report in the Washington Post, the defeat of FARC was not an accident– the US government played a substantial part. The real credit, in my opinion, should go to the Colombian government and military for their dedication and professionalism. By not taking the easy way out and continuing with repressive and arbitrary policies, the government/military actions have been (mostly) restrained. Compared to neighboring Venezuela, Colombia looks positively progressive.

A good summary of a wide-ranging subjects is at http://topics.nytimes.com/top/news/international/countriesand territories/colombia/

For a peek at the effect of climate change on the famous Colombian coffee crop, try this…http://www.nytimes.com/slideshow/2011/03/10/science/earth/20110310-coffee.html

Test yourself– Most Americans have a hard time with Latin American geography and history. See how you measure up.

http://www.csmonitor.com/World/Americas/2011/0203/Think-you-know-Latin-America-Take-our-geography-quiz/Which-country-is-South-America-s-second-largest (I managed an 83%– while the average was 73%…shoulda done better though).

A few observations are in order;

1. Costa Rica is a beautiful country;
2. Ticos are lovely people;
3. There are great opportunities here for retired or retiring people;
4. There seems to be a dearth of tennis courts.

Shortly after our arrival, we made a spectacularly great, momentous even, decision by deciding to spend the extra eight dollars per day to rent a GPS…it has saved us numerous times, including helping to find our hotel right after leaving the rent-a-car place…I was totally lost driving out the gate and would have gone 180 degrees in the wrong direction…good save… We have to program it in Spanish…my spelling is a bit cumbersome but adequate. We will also buy a GPS when we return to the States…I learned my lesson.

We named the GPS “Rita,” after our hostess who squired us around San Jose and environs the first two days…the human Rita is knowledgeable, fun and vivacious.

Rita the GPS is knowledgeable and imperious. 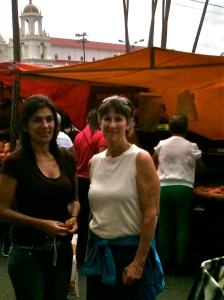 Linda and the Human Rita

It is the rainy season, hot and muggy except when it is pouring down rain. In the tropics, a downpour can be so intense it almost drops you to your knees. Umbrellas are great except the rain can be so fierce that nylon is too flimsy—what you need is an umbrella made of cloth the thickness of a circus tent. You have to stand straight up and down—if you tilt, the weight of the water will tip you over, knock you to your knees, and pound you into the pavement.

I remember flying in storms while in Bolivia where the noise level in the cockpit was so loud as to be nearly maddening. I put one of those episodes in my book but it happened a lot in the summer storms in January and February.

Water is not much of an issue down here—certainly not like it is in drought-ridden New Mexico and Colorado. On the roads that have shoulders, the Ticos build concrete slabs that direct water run-off into concrete ditches. The ditches effectively sluice the excess away to prevent cars hydroplaning on the roads. In only a few places were these ditches overwhelmed by the rain. House driveways are four inch-thick concrete slabs over the ditch. The problem is that if you drive off the road, you drop into a concrete ditch eighteen inches deep or smash into concrete driveway slab. We did not see any such accidents but we weren’t here on many Saturday  mornings after Friday night blow-outs. 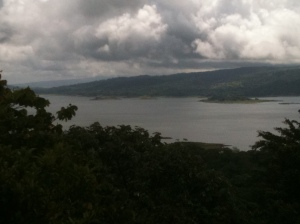 We spent three days in and around the Lake Arenal, the largest artificial lake in Central America. It runs northwest to southeast with the Arenal volcano at the southeast end. National forests/parks (jungles actually) wrap around the southeast section of the lake. During our time here, we have glimpsed the entire volcano through its shroud of clouds one time. When we visited here in 1998, the volcano was burping all night; the boys were fascinated by the lava “fireworks” show. We stayed in a small town called Tilaran on the west side of the lake. The volcano is on the southeast side near a town named La Fortuna where we stayed in 1968. The owner of our B&B says that it rain two meters per year at his place; on the eastern shore of the lake in the village of Arenal it rains four meters/year; and at La Fortuna it rains six meters a year. That’s over eighteen feet of rain in twelve months, though concentrated in the five month rainy season! Taos averages twelve inches of rain/year. I guess that’s why the climate in Taos is classified as semi-arid instead of tropical rain forest. 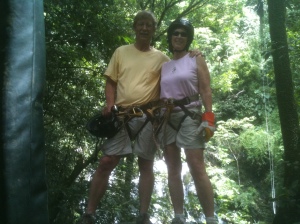 We did a zip line through the jungle near the volcano. It was great! We had six separate lines, five of which were longer than the longest one in Angel Fire as well as much higher. Zip lines are a real kick—if you are searching for a rush and come across a zip line opportunity, try it.

This may not be news to you but Costa Rican coffee is superb! I normally only drink coffee in the morning but after sampling the local fresh beverage, I made excuses all day to stop in one of the local coffee shops that seemed to be everywhere. 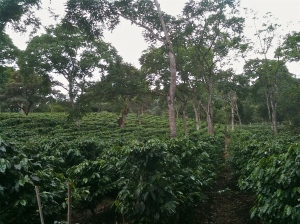 Coffee fincas were all over the place!

This is a great country with wonderful people!