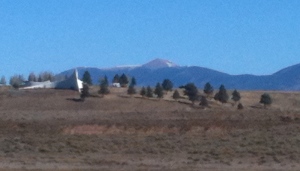 Located just north of the Village of Angel Fire, New Mexico, the Memorial was started by Dr Victor and Jeanne Westphall in honor of their son, Marine 1st Lt David Westphall who was killed in 1968. It was the first major Vietnam memorial in the country and helped inspire the Memorial in Washington. It became a New Mexico state park in 2005 and is the only state park dedicated exclusively to veterans of the Vietnam War. Congress officially recognized the facility as a memorial of national significance. It is an applicant for a national veterans cemetery.

The Memorial consists of a Chapel, a Visitor’s Center, extensive gardens and walking paths and a bookstore/gift shop. The Visitor Center features photographs and banners from some of the 210 units that served in Vietnam. The Center’s purpose is to educate Americans about Vietnam and to maintain a haven for healing and reconciliation for veterans of all wars. There is a media room and Veteran’s Room that honors military personnel killed, taken prisoner or missing in action. The POW/MIA flag waves outside the Center.

The Memorial is run and maintained by the State of New Mexico, aided by the David Westphall Veterans Foundation. The stated purpose of the Foundation is “to honor America’s veterans and members of its military forces by memorializing the sacrifices they have made and by recognizing the sense of duty and the courage they have displayed as they answered their country’s call to arms.”

The Memorial and its grounds are well maintained, with exhibits that can stir the soul. It is a Run For The Wall stop by vets on their way to the National Vietnam Memorial during the days leading up to the Memorial Day Weekend. We host special services and patriotic celebrations throughout the year.  I’ve seen lots of strong men reduced to tears in the Center. A good place to find peace, to start or accelerate the healing process.